Welcome back to Aryan Sale Site. Ever wondered which is the most unique Metrorail in India? Come! Let’s talk about an Indian Metro Railway. which will never disappoint you. I repeat, Never! Before starting, if you are new to Aryan Sale Site, we request you to follow this site. We regularly upload Blog post. systems across India. Also if you enjoy this post, please hit the Follow button. 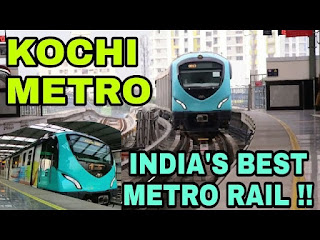 history of metro rail in India

This will encourage us to make more and post. If you are a non-Keralite, you might wonder why such a small city like Kochi has a metro? Well, Kochi seems to be small. But it isn’t! It has every potential that India’s big metro cities have. The Kochi Metro is an example of it. It is an example to every other metro railways in the country. Let us explain. The Kochi Metro has been named the best urban mobility project in India by Government of India’s Ministry of Urban Development in October2017.

It was the fastest constructed metro in India before Lucknow overtook it. Construction of Kochi Metro started in June2013 and the first 13 km section from Aluva to Palarivattom was inaugurated on 17 June2017. Today, Kochi Metro serves a length of 18.4Km from Aluva to Maharaja’s College Stadium. It has set an example to entire India by hiring employees from the Transgender Community and Kudumbashree. It is India’s only metro which connects rail, road and water transport facilities.

Kochi Metro is the world’s first metro whose entire management system are handled by women. Kochi metro is India’s first metro to use CBC signalling system. This means, technically it is India’s first driverless metro. The trains need an attendant to start, stop and operate the doors. Every other work in operating the train is automated. The entire corridor has vertical gardens on the metro pillars. Every metro station flaunts various culture all across Kerala. The stations are one of the smallest in the country, so are the trains which have just 3 coaches. The trains are 2.9 metres wide and 65 metres long. The Kochi Metro was initially planned in the year 1999.

RITES even made a Detailed Project Report for the metro and submitted it to the government. Since then a lot of parties were changed in the level of both the State Government and Centre Also, the centre expressed serious doubts about whether a metro in Kochi will be feasible or not. Based on that it was suggested to opt for a light metro system for Kochi. Based on that, the width of the trains was decided to be 2.7 metres. But Kochi Metro Rail decided to opt a medium-capacity metro system. So the width was increased to 2.9 metres. The Delhi Metro Rail Corporation or DMRC supervised the construction of the entire metro. In 2011, the Kerala Government said E.Sreedharan, the MD of DMRC known as India’s Metro Man would be in charge of the project.

history of metro rail in India

But in 2011, Kerala Minister for Public WorksV.K Ebrahim Kunju decided that the work would be offered by global tender. Sreedharan after this mentioned that he would not be interested in the project unless DMRC is involved. The opposition supported the involvement of the DMRC, and on October 27, 2012, citizens of Kochi formed a 25 Km Human Chain on the original alignment of the metro from Aluva to Petta. They demanded construction of Kochi Metro be handed over to DMRC for fast and corruption-free construction. Under the supervision of DMRC, Kochi Metro was constructed within a record time of 4 years.

how to lose weight naturally at home remedy

And now, Kochi Metro Rail is all set to introduce India’s first Water Metro which will connect 10 nearby islands on a 76 km network. The project is being backed up by Germany. The tendering of the metro will be over by this December, and by next December, the entire network will be on service. It will serve at least 1 lakh islanders. In a few days, we will show you how beautifully Kochi Metro Stations have been designed. With a headway of 8 minutes, these metro trains made by Alstom are one of the swankiest ones. Now you know why Kochi Metro is an example to the entire country. We should learn from them.