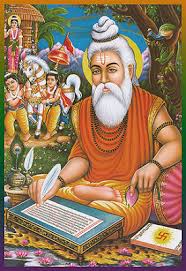 We also find the life story of this sage in Matsapurana. There he is not a bandit Ratnakar, but a bandit Agnisharma. The robber Agnisharma was the son of a Brahmin named Kaushiki. In ancient times there was a Brahmin named Sumati, his wife Kaushiki. The Brahmin couple was very religious and full of chanting. Their son’s name is Agnisharma. He was disobedient to his parents from his childhood. Brahmin Sumati hoped that his son would learn the same way of worship. The family will be executed through the action of Yojana-Jayana.

But as Agnisharma came of age, he did not concentrate on his studies, but turned around and spent time. The Brahmin couple’s worries about the disobedient son did not end there. After a while, there was a sudden drought in the country, there was no harvest to eat. There was a famine. Sumati Brahmin decided to go abroad after suffering from hunger.

Thus Sumati, with his wife and son, wandered into a deep forest. The Nirupaya Brahmin couple built a hut in that forest and started living there. Meanwhile, Agnisharma, uninterested in Bedavasya, befriended Avir and the bandits in that forest and began to spend his life as a bandit. 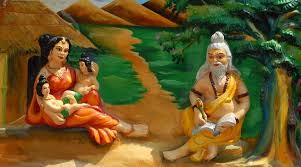 Agnisharma used to sit on the edge of the forest with a black stick in his hand. He used to rob all the passers-by and kill them with the black stick. In this way, Agnisharma began to support the parents, wife and sons, the wealth stolen from the passers-by. Agnisharma one day captured the swordsmen traveling on the way to seize everything. Not recognizing them, he said in a harsh voice, “Give me your clothes, your money, and everything else.” I will kill you now. Get ready to go to Jamal.

What did God say?

Saptarshi chief Bhagwan Atri said, “Listen, bandit, we are all ascetics.” We have set out on a pilgrimage, there is nothing to steal from us. Except for wearable clothing. Why would you take the sin of killing an ascetic for this little piece of cloth?

On hearing Atri’s words, Agnisharma became angry and said, “Ascetic, I am not afraid of sin. Because I support my father, mother, wife and children with the money of banditry. So everyone in the family will share my earned sins. No. ‘

Hearing Agnisharma’s words, Sage Atri smiled softly and said, ‘Listen, you leave us and go home and ask your mother, father, wife and son which of them will accept the sin of your robbery? If they say this sin is not for them, then you Why take the curse of vain ascetics?

Maharshi Atri’s words changed Agnisharma’s mind, he confessed in front of the sage, really, I never asked them this question. Listening to you today, I think I should have asked this question. Wait a minute, I’ll come and ask them, what is their attitude towards my sin? Agnisharma ran home.

What did he hear after returning home? 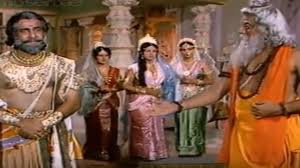 As soon as he entered the house, he met his father for the first time. He said, “Son, you have committed that sin, so it is up to you. It is your duty to provide for your parents. It is not my job to decide how you will do it.”

Hearing this, Agnisharma went to his wife. The wife also heard all and replied, this sin is certainly not mine. You married me, I have no interest in knowing how to feed. Angry Agnisharma went to the infant son, the son said, Father, I am a boy, so I do not know about sinfulness.

Finally he heard the extreme words in his mother’s mouth. Kaushiki said son, whoever commits sin has to share in the sin. Hearing this on the mother’s face, Agnisharma’s mind became extremely aloof. Alas, I have gone downhill for them. But today there is no one beside me. These ascetics opened my eyes. With this thought he came to the ascetics. Then he gave up banditry and became engrossed in pursuit. Muni Balmiki, a disciple of Atri Rishi, became a bandit from Agnisharma.